To Foil or not to Foil.

The F-boat Yahoo group discussion lately has been touching on somethings I have been considering. Water Ballast and Foils. Foils I think would be very usefull even when not racing to provide that bit more security in  following weather. I think with foils that can be retracted to trim the lift there will be an added margin for safety if required. I have purchased Ian's drawings to reinforce the standarad F-32 beams for foils in the floats.

From the master,
"The main issue is that beams have to be strengthened, otherwise
they will eventually break due to load reversal.
The drawings available as such for installing the foils give the basic
position and general details of the foils.  But easy enough to fit, provided
foil is set at correct angle".


The new beams are built of vinylester resin and coated with gelcoat. I think we all have to paint the gelcoat tops with nonskid. However, I am/was a little concerned about the use of ester resins rather than epoxy, particularly with respect to epoxy adhering to ester surfaces in the important beam to float joints, but defer to Ian's knowledge re: epoxy having the greater trength and durability.
"Only marginally so, if anything compared to the new infusion vinylesters.
These are very impressive and I prefer not to use epoxy again. Epoxy beams
would be very expensive as all procedures would have to be changed, and
considerable testing done, as epoxy does not infuse as well as vinylester".
I was a bit puzzled by Ian's comments, quite a while ago now re: the Factory made beams. He has stated that the factory beams will be lighter, stronger (sure thats a no brainer) but also higher than the home made beams. Higher?
Edit: Going through some old F82 posts on SA and found this from Foiledagain.  Noice! 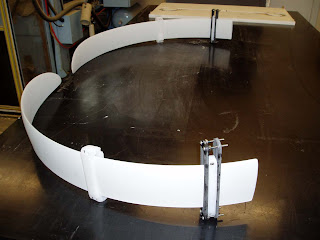