Still thinking out loud with these posts. I hope the info comes in handy later.

Details for the F32SR have been released recently on Ian's website. The SR beams are "all carbon" also with vinylester resin. They have integrated tubes for water ballast in the float rear compartment. Ian recently said the SR beams will fit the F-32AX, so it occurred to me that this gives the possibility of carbon beams with float and main hull water ballast. 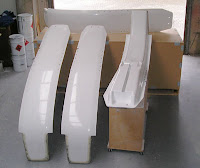 M Vandoren echoed one of my thoughts on the yahoo group forum recently. He is currently building an F-32 and asked about fresh water ballast. "I figure if I have to carry the water anyway, I may as well try to help it improve sailing performance rather than weigh me down". Water makers require a lot of noisy engine time, and fuel, (with only a single battery for everything). So maybe there is merit in the idea. The tank would have to be tightly sealed and able to pump actively from one side to the other. Sea water ballast OTOH would only need a reasonably sealed dump valve system (See Cheekee Monkee). Drip or small leaks would not be a problem as you can replenish the supply.
A few experienced and respected Tri sailors weighed in, Ira Heller doesn't like the idea as it reduces safe loaded weight for cruising. Jim Thompson sits on the fence and thinks maybe in the rear of the main hull is OK, but not in the floats. Paul Butler (Teamvmg F-32 builder) says "must have the facility to dump it all very quickly" I guess like reefing early, he suggests fresh water ballast may lead to regrets if dumping is delayed. Good point! Martyn is of the same opinion and adds wisdom, "I'd keep it as butt simple and light as possible and if you have an option of adding ballast, be sure to have a sure, quick way to dump it"."

On the other hand Skiff and Tri sailor Ron Radko says "Depends on how much ballast and how much crew you have. I know on our 28 the upwind speed difference in planing conditions is huge if you have crew on the rail vs in the cockpit. (7.5 to 8 knots vs 10-12). If you were shorthanded having 3-400 lbs of water ballast in the float would be the same load as the crew on the rail without having to be out of the cockpit".

Ian chimed in with
"Using drinking water would be a good option when cruising, as one is just
shifting ballast that is already on the boat, rather than adding weight. It
would be viable, but the piping could get rather complex. Probably not worth the
effort for most. Easier to carry extra water in plastic Jerry cans and then move
to windward float on long legs".

Structurally there are no problems Ian said, "the floats can take the extra weight". Is it worth it? He says
"While adding ballast can also slow the boat, ... usually the gain in
performance is higher than the loss from taking on the weight, so the extra
ballast weight is justified". 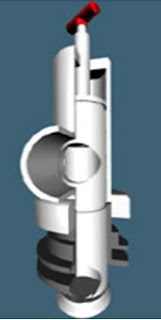 Cheekee Monkee has a ballast system in the aft extension. As Ron White has said in earlier posts, the tanks are filled and emptied by venturi bailers facing for'n'aft. The SS flaps in the bailers act as valves.
The Mini Transat fleet (Pogos) are using Sofo scoops. (see this blog). The big advantage of these scoops is that they are o-ring sealed and have a big orifice. Only one scoop is required for filling or emptying either side tank but the wider flat bottomed Mini boats use two (Port'n'Stbd) and the pressure in the pipes when moving is sufficient to pump the water to the high side tank of a Pogo. The venturi effect sucks the water out the tanks when the scoop handle is turned 180 degrees.  High side tanks need a vent on the top for spewing excess water to the deck or over the side when the tank is full.  The Sofo scoops are/can be paired with Valterra gate valves. 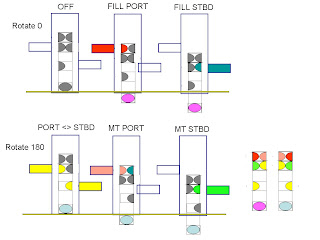 Perhaps make something like this single unit scoop for filling or emptying either of two tanks and gravity draining the high side to the low side.
Overall even if the plumbing can be made to work, marine bacteria in the tanks might make the sweet water taste pretty foul after a few days. I'm not sure there would be an efficient way to really clean the tanks out. Everyone knows what a marine head tank does when storing salt water flush, wonder if the water would be undrinkable after long.
Edit: See Capt Pauley's recomendations.
Posted by Screener at 2:08 PM